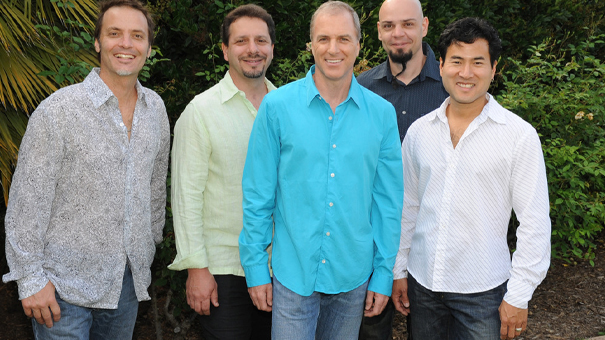 The Rippingtons are a Grammy-nominated contemporary jazz group, founded by guitarist and composer Russ Freeman in 1985. The group has passed the thirty year mark, and continues to innovate. Under Freeman's production, the group has released 22 albums, all of which have attained top 5 Billboard status, with 5 of them reaching #1. Their debut album, "Moonlighting", which Jazziz magazine has called "the number one most influential contemporary jazz album of all time."

The group's influences are wide-ranging, from instrumental pop, to rock, to world music, to EDM, to R&B. Some artists having recorded with the Rippingtons include Arturo Sandoval, Jeffrey Osbourne, Kirk Whalum, Kenny G, Dave Grusin, the late Joe Sample, Dave Koz, David Benoit, Patti Austin, Peter White, Rick Braun, Zak Wylde, and many more. The Rippingtons were chosen Best Group 2000 by Billboard BET, and Best Group 2 years in a row, 2001 and 2002 by the Oasis Awards, in addition to Achievement in Video 2001.

Fans that have followed Russ Freeman and The Rippingtons for any stretch of time over the past quarter century know the versatile award winning and Grammy nominated guitarist/composer, and producer has long had a penchant for naming songs and albums after exotic places (Aruba, Kenya, Morocco, Weekend in Monaco, Sahara, etc).

In recent years, Freeman has noticed that The Rippingtons' fan base has increased exponentially, as the group's longtime admirers transfer their passion for the music to their children. Several Rippingtons albums have been inspired by Freeman's travels, and collectively, they have formed the life soundtrack for hundreds of thousands of contemporary jazz fans worldwide for a quarter century.

The titles of each hit Ripps album has often reflected Freeman's deep wanderlust, whether he had actually been to the places he wrote about or was just dreaming of them in musical terms. These include Kilimanjaro, Tourist in Paradise, Welcome to the St. James Club, Weekend In Monaco, Live in L.A., Sahara, Brave New World and Live Across America. In 2006, the band celebrated two decades of instrumental magic with The Rippingtons 20th Anniversary, a remarkable CD/DVD package that included a CD of all new Ripps music and a DVD featuring a colorful retrospective as well as exciting videos from over the years.

On their latest Peak Records album, Russ Freeman and The Rippingtons take their lucky fans on a trip of a lifetime to Cote D'Azur. Traveling with them is their trademark jazz cat, by artist Bill Mayer, who again graces the CD cover art. Next time out, who knows? Freeman's musical passport still has a lot of open space to be stamped, and the journey continues!