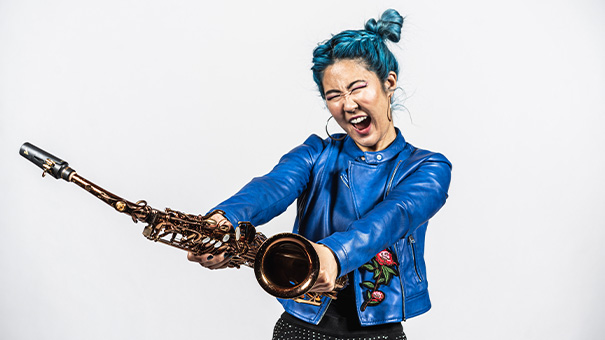 An unequivocal musical prodigy, singer-saxophonist-songwriter-composer, and bandleader Grace Kelly has rocked the jazz world with sold-out concerts, 13 acclaimed albums, and a resume that includes performing at Barack Obama's inauguration in 2009, as a featured soloist with the Boston Pops Orchestra and as part of the house band for "The Late Show with Stephen Colbert" – all before reaching her mid-twenties.

Kelly is a saxophonist of prodigious talent. She was named nine times consecutively in the Annual Downbeat Magazines Critics Poll "Rising Star Alto Saxophone" from the age of seventeen, making her the youngest sax player ever named to the poll and winning the Critics Poll in 2016. Kelly is also a skilled songwriter and was named the winner of "Song of the Year" for her single "Feels Like Home" in the John Lennon Songwriting Contest. She has won multiple ASCAP Composer Awards, Boston Music Awards, and International Songwriting Awards.

Featured by Vanity Fair as a millennial shaking up the jazz world, Grace's state-of-the-art brand of electro jazz-pop and inventive digital content push her to the forefront of the fusion scene, alongside names like Jon Batiste, Jacob Collier, Esperanza Spalding, and Too Many Zooz.

Grace's latest album was inspired by the words of incredible women who embody great courage and resilience, including Maya Angelou's "And Still I Rise," a poem that ignited much musical inspiration. The result of this album is a deeply personal collection of songs with anthemic beats, upbeat grooves, and soulful melodies and lyrics. Grace created this album to help people connect to their inner strength and voice and find the courageous hero within themselves.

Aside from thrilling audiences in concert, Grace's stardom reaches the acclaim of her audiences online. The millennial artist has developed a new paradigm to exhibit her remarkable talent and unparalleled showmanship with the masses, curating an immersive user experience for her fans across multiple social media platforms. Grace's dedication to posting engaging content and offering insight into her daily life has deepened her brand, bringing thousands upon thousands of eager fans into her world and gaining millions of views online, allowing the artist to bridge the gap between virtuosic musician and cultural phenomenon.